What with all this Falklands stuff on the tele and radio and the fact that my book 'Sea Skimmer' is selling well on Amazon, I was looking through my logbook the other day and thought it might be of interest to do blog updates about my part in the downfall of the dastardly Argies as it occurred all those years ago. I've put quite a lot of my experiences into the book but that's a novel. This is how it really happened:

12 April: We were returning in HMS Andromeda to the UK having been in Baltimore. My logbook entry for the day says 'ESM and HC Training' Translated this means we were snooping around using our new radar listening gear called 'Orange Crop' and then returning to the ship to allow the ship's helicopter controller to exercise his skills on us. We knew about the Falklands of course and had hoped to be sent directly south from the States but got the recall to UK instead. We'd been deployed on our own since early January so it wasn't really surprising, the ship would need some serious TLC before another major deployment. In fact we were quite in the dark about what was going on at home. In some ways it was very much the calm before the storm......

So the main players: 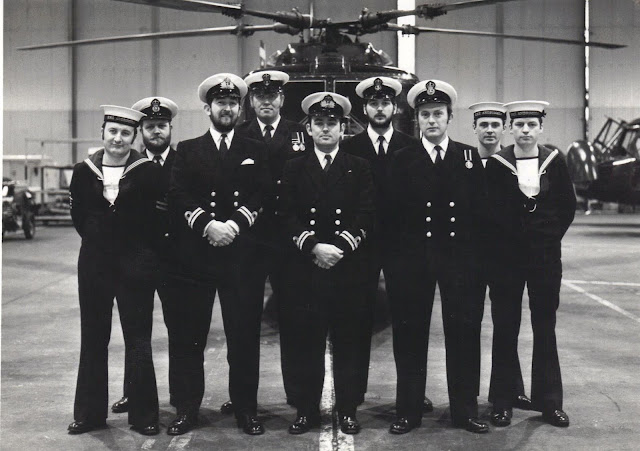 The flight team when we commissioned with the newly formed operational Lynx squadron - 815. Bob Mckellar, the Flight Commander (with beard) and self (the good looking one) leading with ARFA in the background. 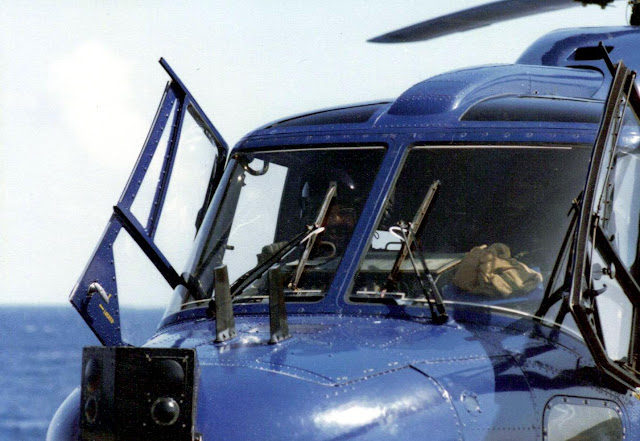 ARFA my Lynx - well not mine really but I was the only person the Queen said could fly her! And why ARFA? Well it wasn't my idea, blame the flight guys. We had him brand new from Westlands and like a lot of complicated machinery he took time to settle down. In the end the aircraft was pretty reliable even though the lynx in the early days had a few issues. However at one point a certain member of the team was heard to say 'ARFA Fucks sake he's broken down again' and the name stuck. Don't know if they do it nowadays but we all named our aircraft then and believe me this wasn't the daftest. The odd protruberance on the nose is one of the aerials for the aforementioned Orange Crop and what a great piece of kit that was. Anyone transmitting on radar could be heard and we could identify them, it was going to come in really handy only a little while later. 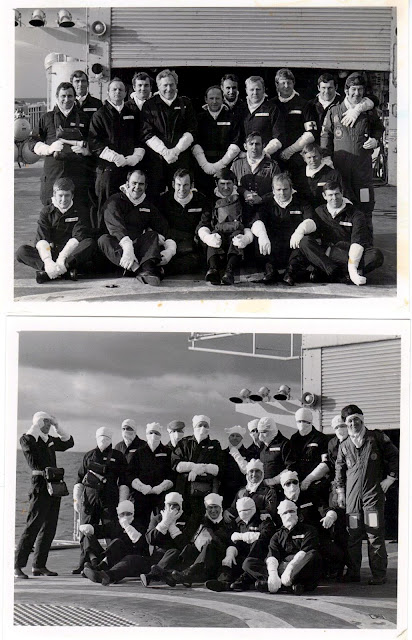 The wardroom with and without anti flash gear taken on the way down south. 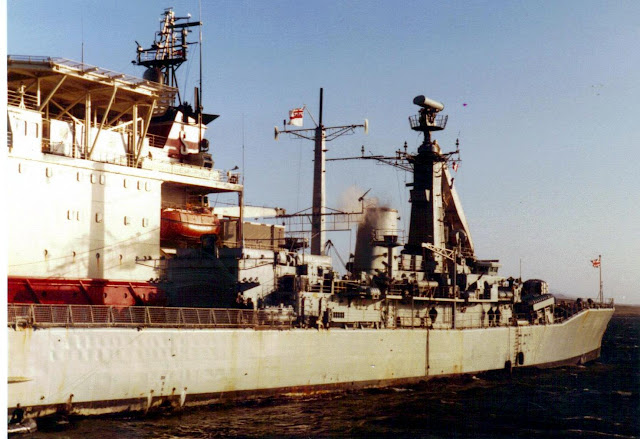 And the star of the show - literally - the 'batch 3 conversion' Leander class Frigate, HMS Andromeda. Armed with 4 Exocet, the new Sea Wolf anti aircraft missile system, new sonars and of course the latest and most deadly helicopter. Captain Jim Weatherall described her as a pocket battleship and he was right. The photo was actually taken just after the surrender in Port Stanley hence the rather scruffy state of the ship - but so would you have been after such a long time at sea!!
Posted by Larry at 02:17