I won't do an entry every day but pick out interesting items as they appear from my logbook.

So 13 April we flew for an hour and ten minutes at night doing 'ESM, flare drops and Torpedo loads'. Translated this meant that we went off using our good old Orange Crop looking for a target - in this case it was probably our own ship as we were in the middle of the Atlantic at this time. We then dropped three 4.5 inch flares on her to get a visual identification. This was commonly known as a rather sophisticated and expensive way of committing suicide. Certainly any Soviet ship would have shot us down long before we could be silly enough to drop flares on her. And if we needed to get that close for a looksee something was very wrong. Mind you only a few weeks later much to everyone's surprise, we would be doing it for real and it was every bit as terrifying as you would expect - more later.
Torpedo loads would have been done on return to the deck. The flight team would split into two teams of three with the Chief supervising and load us up with two Mk 46 homing antisubmarine torpedoes. We always tried to do loads at night as it was the most demanding way to do it.

I know this was night flying but I though I would include the photo below of me beating up the ship. This was my usual way of rejoining in daylight and always gave a nice burst of adrenalin to all of us before landing. In this case the Officer of the Watch on the Bridge was getting his share! 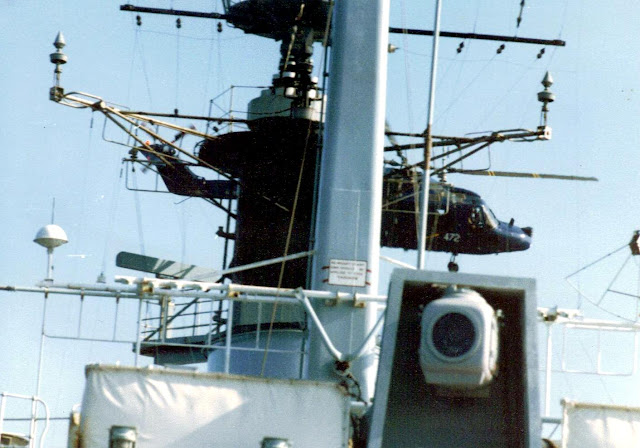 Larry
Retired from the RN in 2000 as a Commander, Aircraft Engineer and helicopter pilot. Worked in industry for 7 years and got bored so Fiona and I bought a 42ft yacht and bummed around in the Caribbean for several seasons. Came back to UK and did some professional yachting before buying a narrow boat and bumming around the canal network. I've always wanted to write and started with my first novel 'Jacaranda' based on my Caribbean wanderings. Now up to 12 novels and going strong. Also, just published a factual history of the Lynx and now working on a similar book about the Wasp helicopter.